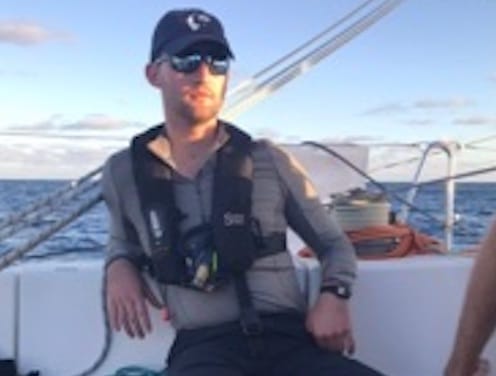 Blog is from Ivo today.

I started off the afternoon shift today saying “what do I have to write about in the blog today, nothing has really happened”, which serves me right really.

Starting from yesterday afternoon, the wind hole that we found ourselves in for the previous few days had started to fill in and breezes were beginning to pick up. This was welcome news indeed, especially considering that the instruments were gloomily extrapolating from our sea snail pace that we were likely to still be bobbing around in the middle of the ocean come Christmas time.

Traditional greetings such as “Good morning” or “Hey how’s it going” were slowly morphing into things like “10 knots mate, 20 apparent” as people emerged from the hatch onto deck, normally accompanied by a grin and a smug brag about the top speed of the boat surfing down the swell.

Whilst daylight prevailed the mood kept up, and the unsophisticated predictions of our arrival time dramatically improved. Night time, however, lends a whole new set of challenges to what are very similar conditions during the day. The horizon disappears, the winds can be more changeable and the contours of the sea vanish leaving the helmsman to steer by ship’s compass and feel alone.

The store of rest built up by the crew during the quieter days of the race rapidly dwindled over night as rolling swells and some nervy helming forced many out of sleep and in one case Miki out of his bunk.

We were beginning to appreciate the toll that these favourable trade winds would extract from us in return for a faster passage and could now look forward to 8 days of surfing through the swell rather than 15 days languishing without wind. It is at this juncture that I made my rather ill conceived comment about the uneventfulness of the day.

We had opened the package given to us by Global Yacht Racing for when we reached our half way point at lunch and had happily donned the animal face masks, tooted on the party tooters and scoffed the mini toblerones and haribo contained within. After lunch and the festivities subsided the off going watch descended to catch up on their sleep and my watch clipped in to begin our shift which started very promisingly indeed.

As I write this we have handed the ropes over to the other watch, hoping they will propel us through to a podium finish in St Lucia…